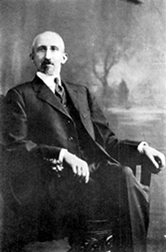 Thomas H. Spence (1867-1937), a professor of languages, served as acting president from 1912 to 1913. During his brief tenure, the college constructed a temporary dining hall and auditorium, and the President’s House was converted into a dormitory.

According to an account in the 1909 Reveille yearbook, Spence was born in 1867 near Snow Hill, Md. He attended Maupin's University School in Ellicott City and the Johns Hopkins University before he became the principal of the Stockton Academy in Worcester County.

Spence was elected chair of languages at the Maryland Agricultural College in 1892 and later became a member of the Board of Trustees, vice president of the college, acting registrar and dean of the School of Liberal Arts, among other positions. He served on a number of faculty committees, including Examinations, Schedules, Collegiate Routine, Library, Commencement and Class Day. He also played a role in organizing the college's first fraternity, Gamma Pi, which later became Sigma Nu.

Spence became dean emeritus in 1924 but continued teaching languages and philosophy until his retirement in 1934, after 42 years of service to the university.