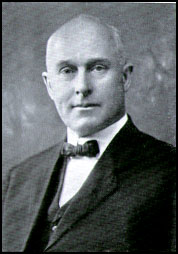 Harry J. Patterson (1866-1948), a graduate of Pennsylvania State College, was director of the Maryland Agricultural Experiment Station before being appointed president in 1913.

During his administration, which lasted until 1917, Patterson responded to faculty demands by establishing three years of high school as a prerequisite for admission. Two buildings were completed, and the military system gave way to a modern collegiate atmosphere. The first women admitted to the university, Elizabeth Hook and Charlotte Vaux, arrived in 1916.

Patterson resigned to return to the Agricultural Experiment Station, housed in the Rossborough Inn.

The H.J. Patterson Building, home to the Departments of Environmental Science and Technology, Plant Sciences and Landscape Architecture, and Cell Biology and Molecular Genetics, as well as the Health Professions Advising Office and the Norton-Brown Herbarium, is named for him.