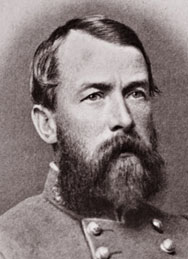 Samuel Jones, a graduate of West Point and former Confederate major general, was president from 1873 to 1875.

During his presidency, Jones reconstructed the curriculum and the overall focus of the college. He established six departments—languages, mathematics, English, natural science, moral philosophy and agriculture—with emphasis on science instead of the classics.

He also added military training and continued the preparatory school, advertising it as a preparatory course for West Point and the Naval Academy.

The board requested his resignation amid the controversy over his shift in emphasis from agriculture to militarism. Following his presidency, he became a clerk in the federal war department. Jones died in 1887.