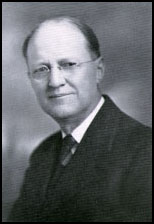 A native of Indiana, Pearson received an M.S. from Cornell in 1894. Upon graduation, he became assistant chief of the Dairy Division of the U.S. Department of Agriculture in 1895; later he became a professor of dairy science. He then served as New York commissioner of agriculture before going to Iowa State College as president. While there, he also served as assistant secretary of agriculture during the war emergency period of 1917-18.

His main contribution to Maryland was a greatly expanded physical plant, both in Baltimore and College Park, with 13 buildings added, as well as additional acreage.

The Board of Regents (formerly the Board of Trustees) requested Pearson's resignation because of personality conflicts, his apparent overemphasis on construction projects, accusations of neglect of the faculty, and two widely publicized court cases.