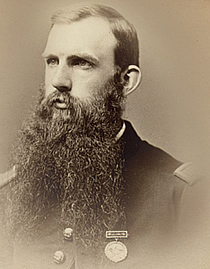 Henry E. Alvord (1844-1904) was hired as both director of the new, federally funded Agricultural Experiment Station and as the college's president. He filled these roles from 1888 to 1892.

A native of Massachusetts, Alvord had served as a major in the Union army after a brief period of study at Norwich University. Following the Civil War, Alvord accepted a commission in the Regular Army in 1866 and was detailed to garrison duty in what is now western Kansas, Oklahoma and northern Texas. There, he published his first major work on the cattle industry, beginning his career as a widely respected dairy scientist. He was a professor at the Massachusetts Agricultural College and helped organize the Association of American Agricultural Colleges and Experiment Stations.

In his role at Maryland, he restructured the curriculum around agriculture. He eliminated the prep school and the engineering course and greatly reduced entrance requirements.

The college experienced little growth, however, perhaps due in part to its narrow agricultural focus. The trustees pressured him to resign, and he subsequently served as president of the Oklahoma Agricultural and Mechanical College, known today as Oklahoma State University, and as head of the dairy division of the U.S. Department of Agriculture.