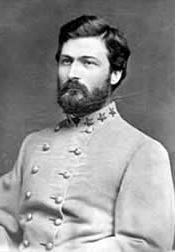 George Washington Custis Lee (1832-1913), the son of Robert E. Lee and a former major general on Jefferson Davis's personal staff, was appointed president in December 1866 by the Maryland Agricultural College Board of Trustees.

The following month, Lee declined the board's offer out of his sense of obligation to the Virginia Military Institute, where he was chair of Military and Civil Engineering. His decision may have been affected by the Maryland legislature's strenuous objection to his selection.

He remained at VMI for three additional years, then accepted the presidency of Washington University, later renamed Washington & Lee University, following the death of his father in 1870.

Custis Lee remained at Washington & Lee until 1897, then retired to a family estate in Virginia, where he lived quietly until his death.